The Psychic being in Savitri

Sri Aurobindo so said
" Nobody can transform himself by his own unaided efforts; it is only the Divine Force that can transform him. If you keep yourself open, all the rest will be done for you."
CWSA-31

The psychic being in Savitri
The first line of this verse describes the psychic being as being “no bigger than the thumb of man”. This is an allusion to verse 2.1.12 of the Katha Upanishad which says “The Purusha, of the size of a thumb, dwells in the body. (Realizing Him as) the Lord of the past and the future, one does not (henceforward) want to protect oneself. This verily is that (thou seekest).“
She puts forth a small portion of herself,
A being no bigger than the thumb of man
Into a hidden region of the heart
To face the pang and to forget the bliss,
To share the suffering and endure earth’s wounds
And labour mid the labour of the stars.
This in us laughs and weeps, suffers the stroke,
Exults in victory, struggles for the crown;
Identified with the mind and body and life,
It takes on itself their anguish and defeat,
Bleeds with Fate’s whips and hangs upon the cross,
Yet is the unwounded and immortal self
Supporting the actor in the human scene.
Through this she sends us her glory and her powers,
Pushes to wisdom’s heights, through misery’s gulfs;
She gives us strength to do our daily task
And sympathy that partakes of others’ grief
And the little strength we have to help our race,
We who must fill the role of the universe
Acting itself out in a slight human shape
And on our shoulders carry the struggling world.
This is in us the godhead small and marred;
In this human portion of divinity
She seats the greatness of the Soul in Time
To uplift from light to light, from power to power,
Till on a heavenly peak it stands, a king. 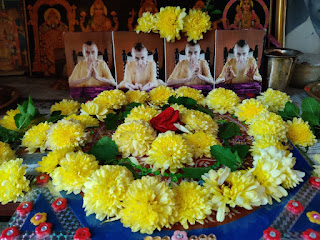 Posted by Umasree at 5:25 AM No comments:

Year 2020 had a great beginning by visiting the beautiful Flowers decoration and group meditation and prayer songs to Sri Aurobindo and Mother at my friend Kumaran's best friend Jaya's house.

Small things make a great beginning and this one hour of group satsang brought in great positive vibes and absolute inner energy to start the year with great enthusiasm and blessing of the Divine Mother.   Thank you Kumaran for this auspicious beginning. 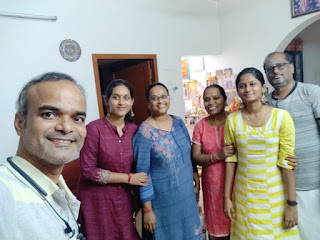 Posted by Umasree at 5:06 AM No comments:

Posted by Umasree at 4:53 AM No comments:

The Mother: A Brief Biography

The Mother: A Brief Biography

Sri Aurobindo’s spiritual collaborator, the Mother was born in Paris on February 21, 1878. Mirra, as the child was called, was spiritually conscious from her early childhood. She spontaneously followed an inner discipline which was accompanied by numerous psychic and spiritual experiences. She took interest in literature and philosophy and practiced painting, music and had remarkable capacities in the field of occultism. In 1906 and 1907 the Mother voyaged to Tlemcen, Algeria, where she studied occultism for two years. Returning to Paris, she founded a group of spiritual seekers. Between 1911 and 1913 she gave many talks to various groups in Paris.
She first met Sri Aurobindo in 1914, and at once recognized in him the figure of the great guide of whom she had repeated visions. She remained in Pondicherry for eleven months helping Sri Aurobindo in the publication of the “Arya”. Because of the war, she had to return to France. After a stay of four years in Japan, she returned to Pondicherry on April 24, 1920, to resume her collaboration with Sri Aurobindo in his spiritual work and never left Pondicherry again. With her arrival the number of disciples around Sri Aurobindo gradually increased. This informal grouping eventually took shape as the Sri Aurobindo Ashram.
From 1926, when Sri Aurobindo withdrew into silence, she was in charge of the Sri Aurobindo Ashram in Pondicherry and all its concerns, giving great attention to the physical and spiritual development of each ashramite as well as to the development of each collective service, each commercial unit and an international school.
She launched the project of Auroville in 1968.
The Mother later withdrew from the day to day activities of the Ashram and devoted more time to the “Yoga of the Cells”.

SRI AUROBINDO, IN HIS OWN WORDS

Dedicated to Mother's every devotee

The quest of inner search started years ago and found Mother as a Solace, mentor and a guiding force towards eternal inner peace, inner happiness and beyond everything a contentment that no materialistic achievements in life could give. Sharing my everyday mailers I received as an ardent Mother's child and also miracles that I hear in one platform dedicated to Mother and Aurobindo's cause of human oneness...one world with peace and happiness

Your viewer stat is

Thought for the Day 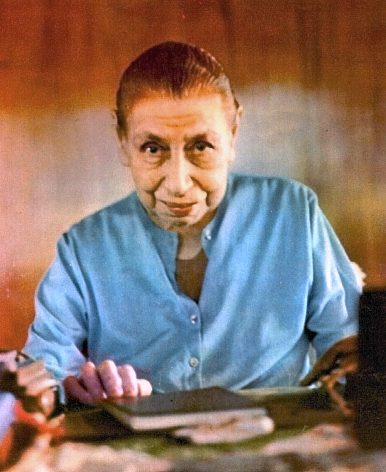